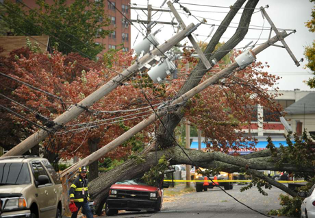 School may still be out but Tropical Storm Isaias offered teachable moments as it made a quick but destructive visit to Connecticut. As clean-up continues and power is slowly restored across the state there are several important Business Continuity take-aways.

First, you never can predict the timing and impact of a disaster. Isaias, a mid-summer category 1 hurricane at its peak when it landed in the Carolinas, was much weaker when it passed through Connecticut. Though it spawned several small tornados, the storm’s average maximum wind gusts remained below 70 MPH. The amount of rain was modest too. Yet this storm caused more power outages across Connecticut than Super Storm Sandy which turned off the lights for 687,000 Nutmeg state residents in 2012.

Power outages varied dramatically by neighborhood. A fallen tree up the street can take out dozens of homes and businesses while some lucky neighbors look on from the comfort of their central air-conditioning. The same disparities apply at a higher level to towns and cities. For example, Derby had 5.7% of its residences lose power while its immediate neighbor, Shelton, had 59.2% of its homes cut off from electricity. The performance of the two power companies serving Connecticut also varied dramatically. The morning after the storm United Illuminating had 30% of its customers without power. Eversource had a much bigger problem with 48% of its customers still in the dark.

Isaias also calls into question the wisdom of depending on critical operations from home offices. The wide-scale adoption of Work From Home practices precipitated by COVID-19 has led some companies to consider eliminating their offices completely. Many Connecticut employees were working at home when Isaias struck. The storm not only cut power for many but a number of mobile communications and internet service providers were also disconnected. Even those who were able to create a hot spot with their mobile device to circumvent lost internet access often found performance levels severely degraded due to high usage levels in their neighborhood.

The uncomfortable truth for many companies is their Work From Home employees were unproductive and exposed to increased security risks during the storm. Working from a local Starbucks or a library is better than nothing but not that much better. Some work can be done from these venues but the chances of being overheard or hacked are much greater.

CAPS, the secure data center in Shelton, fared better than most even though Shelton, as noted, suffered widespread power outages. Power to CAPS from United Illuminating was continuous throughout the tempest. The company’s clients were able to operate without interruption. Even if utility power had been lost, the company’s redundant UPS systems backed by redundant diesel generators would have powered clients’ critical IT systems without interruption. CAPS also features redundant internet bandwidth to assure connectivity even if a primary carrier goes down. CAPS is also one of the few data centers in Connecticut that offers secure Business Continuity Alternate Work facilities. Clients can reserve affordable Dedicated or Shared seats where their personnel can work productively when a disaster occurs.

Isaias demonstrated it is extremely hard, if not impossible, to predict when a disaster will strike or the potential impact. Though the storm surprised many in Connecticut, CAPS was able to continue its record of not having had an unscheduled power outage affecting clients for over 20 years. Partnering with an infrastructure services company like CAPS can dramatically increase the odds of avoiding an unexpected but devasting service outage.

How Quickly Can We Move Into CAPS’ Connecticut Colocation Facility?